Why a Trump victory may not be good for the PAP

Lee Hsien Loong was quick to send his congratulations to Donald Trump after his surprise win over Hillary Clinton.  Well a surprise to him but I saw it coming. A superficial analysis might suggest that a Trump victory is good for the PAP and the fortunes of the Lee dynasty. After all Trump is a fan of Putin and a believer that the US should disengage from its self-appointed role as spreader of the gospel of human rights, individual freedom and democracy around the globe.

Privately Lee Hsien Loong, like the Chinese government, was no doubt horrified by an election that allowed the, in his view, ignorant masses or “deplorables” to choose a candidate so manifestly ill-equipped, in their view, for office and seemingly so ignorant of government and world affairs.

To quote an article in Foreign Policy that came out the day after Trump’s victory:

China aspires toward the Singaporean model of carefully controlled elitism, a country in which Trump represents, in the words of one writer, everything they were taught to fear about democracy.

Lee’s father was of course no fan of democracy because he would never have won a free and fair election. Indeed Lee Kuan Yew had to enlist the help of the British and the internal security apparatus to ensure that he triumphed over his much more popular rivals in the 1960s. Rather like Trump and Putin and Wikkileaks. The only redeeming grace in the  elder Lee’s eye, had he still been around to see it, would have been that Trump was a white male and thus second only to the Chinese in his racial hierarchy. Trump also shares LKY’s virulently anti-Islamic views and surrounds himself with racists, though no doubt they do not believe so fervently in the superiority of Chinese civilisation as Lee Kuan Yew did.

But it is unlikely that Trump, whatever his admiration for authoritarian strongmen like Putin and the closeness of his racial and ideological world view, will be any more fawning in his praise of Lee Hsien Loong’s regime than Obama was.

Obama needed Singapore as  one of the lynchpins of his pivot towards Asia and an ally to push the Trans Pacific Partnership trade deal – a deal which has now been killed by Trump’s election. Obama no doubt found it convenient to deal with a leader who could deliver without having to worry about public opinion at home,  just as Christine Lagarde found it very convenient when she secured Singapore’s immediate commitment of US$4 billion to bail out Greece without having to worry about democratic niceties like Parliamentary approval. Obama repaid Lee Hsien Loong for Singapore’s support by, among other sycophantic and ill-informed praise, his gushing tribute to Lee Hsien Loong’s late father as a great statesman and pundit. With no sense of irony, Obama later criticised Trump as unfit for office based on what he said, much of which was the same  kind of statement that Lee Kuan Yew used to make.

Obama also hosted a special state dinner at the White House for Lee Hsien Loong to celebrate 50 years of ties between Singapore and the US though he memorably managed to mispronounce Lee Kuan Yew’s name. 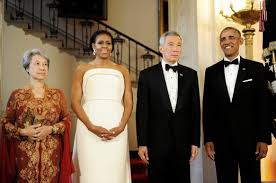 Trump won the election in part by promising to get tough with countries that run massive trade surpluses with the US and with American companies that close down factories in the US, lay off their workers, and move production to lower wage or lower tax locations. His principal targets were China and Mexico though he also included Singapore on the list of countries that have stolen US jobs, citing the decision of Baxter Healthcare Corporation to move 199 jobs there. In Mexico’s case this is unfair since, though it runs a trade surplus with the US, it runs a substantial global current account deficit so it is not subtracting from global demand. Trump also has not mentioned Germany which also runs a substantial global  current account surplus.

Trump’s arguments that the US gets a raw deal from free trade with China have recently found a lot of American academic support. In particular Autor, Dorn and Hanson’s paper published in February 2016, found that while there had been substantial consumer benefits from opening US markets to China, whole industries had been wiped out in the space of a few years by low wage competition. The  large numbers of workers displaced by imports had often failed to find jobs and the jobs they found paid much less than the manufacturing jobs they had before. Autor estimated that between 1990 and 2011 the US lost 2 million jobs in manufacturing due solely to competition from China and not from the effects of automation. This has had big distributional consequences and the Democrats are reaping the whirlwind of their fondness for trade deals. Many of the communities devastated by job losses were those that most fervently supported Trump in the presidential election. Perceived Democratic indifference to their plight largely explains the Democratic rout at all levels in this election.

At first glance none of these arguments apply to Singapore despite Trump specifically singling us out. The Singapore economy is simply too small and in any case the gap between wages in Singapore and the US was much narrower to start with. In his congratulatory letter to Donald Trump, Lee Hsien Loong was quick to point out that the US ran a $20 billion trade surplus with Singapore, one of only a handful of countries the US runs a trade surplus with.

However Singapore also runs a trade surplus with China and any slowdown in the Chinese economy which leads to a drop in Chinese imports, whether caused by a US trade war or occurring as a result of internal problems, will affect Singapore. In fact the Chinese economy has already slowed substantially, whatever its highly dubious statistics show.  China’s need for imports from the rest of the world has diminished as domestic manufacturers replace foreign ones in the supply chain.

Even though global trade is still growing, albeit very slowly, Singapore’s total merchandise trade has already dropped precipitously, by more than 10% in 2015 alone. This has not had dire consequences for our economy so far because imports dropped faster than exports, reflecting domestic economic weakness, leading to a rise in the current account surplus. If global trade stops growing altogether as may very well happen under Trump that will be bad for Singapore. We may finally get to test the counterfactual of whether the PAP are responsible for Singapore’s growth or whether it was just a function of the growth in world trade that took off in the 1960s and 1970s with the advent of innovations like containerisation that substantially lowered transport costs.

In addition to the threat from a global trade contraction Singapore also faces the threat from Trump’s announced plans to cut corporate tax rates to 15% as well as substantial cuts in income taxes. This would be lower than Singapore’s current rate of 17% and while still higher than Ireland’s rate of 12.5% would undercut the growing phenomenon of US companies incorporating offshore or welcoming takeovers by foreign companies in order to avoid taxes. Trump’s advisers have said explicitly that their aim by cutting taxes will be to encourage foreign companies to invert to the US. Another element in their plans is to tax companies on where their sales are located rather than where they have set up a shell company with a brass nameplate outside some lawyer’s office in a tax haven such as Panama or Singapore.

Ireland’s example illustrates what probably has driven a lot of Singapore’s seemingly impressive growth over the last ten years, in addition to the huge growth in the number of foreign workers. Ireland’s GDP expanded by the record breaking amount of 26% in 2015. This did not reflect some huge jump in the productivity of Irish workers but was due to companies like Apple moving the ownership of their intellectual property to Ireland so as to reduce their corporate tax rate to close to zero. These tax avoidance schemes rejoice in names like the Double Irish With a Dutch Sandwich.  When Lee Hsien Loong boasts about how much foreign investment he has attracted to Singapore a large percentage of investment probably includes intangible or mobile assets that do not result in jobs for Singaporeans. I can think of several significant US companies that have redomiciled to Singapore, presumably in order to avoid tax including Broadcom and Flextronics. Whether this will reverse now and Singapore’s GDP will shrink more than it is already doing under the contractionary effect of the global trade slowdown remains to be seen.

So despite the election of someone who is like a milder form of his own father, it is unlikely that Lee Hsien Loong was overjoyed by the result. A lot of Singapore’s hopes and the PM’s political capital were riding on US passage of the TPP which is now dead. Lee Hsien Loong complained about this when he met with President Widodo of Indonesia:

With the probable end of the pivot to Asia and growing American isolationism Singapore is less important to the US than it was under the Obama administration. The only wild card is whether Trump’s tax cuts and infrastructure spending produces a substantial fiscal deficit and thus produces a sizeable boost to global demand while tariffs on Chinese imports reduce the Chinese surplus and with it the contractionary effect it has on global growth.

Without that wild card scenario,  in order to avoid a prolonged recession the PAP will have to take a leaf out of Trump’s book and run a smaller surplus in order to reflate the economy, something I have been advocating for years now. Years of slow or negative growth might finally break the PAP’s hold over Singaporeans but that remains to be seen.