No idea what to do? Talk about the long-term instead 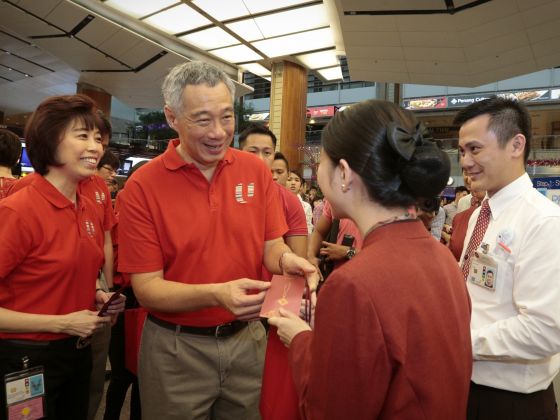 On the first day of CNY Lee Hsien Loong was up early and distributing mandarins and red packets to the Changi Airport workers unfortunate enough to be working on a public holiday. This display of royal generosity towards his subjects presumably did not cost the PM anything since the State media article said it was done in conjunction with the Labour Movement and had become a tradition since 2008. Presumably this means the workers themselves pay for the ang baos from their union membership dues and that those who do not get one are subsidising the others. Should NTUC members have been able to vote on it before their funds were used in this manner? Or did it come from the profits of the monopolistic enterprises that NTUC runs such as NTUC Fairprice? It would be better if the workers’ money was not used for blatant vote buying for the PM and his party and instead used to secure Singaporean workers higher wages and better employment rights and protections from being undercut by cheaper foreign workers.

However I was more struck with the words of wisdom that Lee Hsien Loong chose to impart along with the ang baos.  To quote the TODAY article,

With the global economic outlook uncertain, Singapore will have to ride the ups and downs in the short-term, but its focus must remain on the longer-term, said Prime Minister Lee Hsien Loong today (Feb 8).

And this means focusing on skills upgrading, as well as giving productivity and training a bigger push.

Of course skills upgrading is important but talking about the long term has become a favourite PAP trick when they really have no clue what to do.

An example of this is when, a few years back, the Finance Minister Tharman said in Parliament  that GIC and Temasek should not be judged on their short-term performance (not that we are told how they really performed anyway!) since both sovereign wealth funds were investing for the long-term.  The problem with this is that any kind of poor performance can be justified because short-term losses can be explained away by saying that it will come good in the end. However long before this happens a player with a string of losses will be removed from the gaming table because she has gone bankrupt.

In similar fashion as Tharman using the long-term as a an excuse for why there should be no scrutiny of Temasek and GIC’s investment performance, Lee Hsien Loong is using the long term as an excuse for doing nothing to help the economy now. Reciting the mantra of skills upgrading and training does nothing to help workers losing their jobs and businesses closing down because of a lack of demand for their products and services.  As Keynes famously said, in the long run we are all dead.

The problem is that we have seen a steep fall-off in external demand for Singapore’s exports coupled with a downturn in tourism. The steep drop is due not only to the downturn in the Chinese economy, where the real rate of growth is probably close to zero but also to the lack of demand from the European economies, where aggregate demand is still below the levels reached in 2007, and the effects of falling oil and commodity prices on the oil producers and commodity exporters like Brazil. The US economy is unlikely to take up the slack. This fall-off in demand has fed through into the manufacturing sector which declined by over 5% last year and is now affecting most sectors of the economy.

However even though Lee Hsien Loong seems determined to ignore the problem we do have the capacity to do something about it. Our current account surplus is about 18% of GDP and the Government Surplus is around 7-8% of GDP. That means we can afford to spend more to offset part of the slump in external demand. Since 2014 in my capacity as leader of the Reform Party I have advocated a stimulus package of at least 1% of GDP in the form of cash rebates to median and lower-income households. In the last election we fought on a platform of introducing a basic old age pension and child benefit which we estimated would cost around 2% of GDP. The PAP nonsensically suggested that even a limited programme of this nature would bankrupt us.

Keynes went on to say “Economists set themselves too easy, too useless a task, if in tempestuous seasons they can only tell us, that when the storm is long past, the ocean is flat again.”  And that is exactly what Lee Hsien Loong is doing by saying that we can ignore short-term recessions because things will turn out all right in the longer term. When the Prime Minister talks about focusing on productivity he does not inspire confidence given the PAP’s miserable track record in this regard despite spending billions of dollars on wasteful and fraudulent tax breaks like the Productivity and Innovation Credit and the black hole of the National Productivity Fund where no accounts have been produced. Our productivity growth has been negative since 2011 and still has not surpassed the level reached in 2007.

Of course his landslide victory in 2015 shows that Lee Hsien Loong does not need to worry about what he says or does or indeed do anything, just put the country on autopilot and go to sleep. Any downturns or setbacks can just be dismissed as short-term fluctuations while he focuses on the long term.