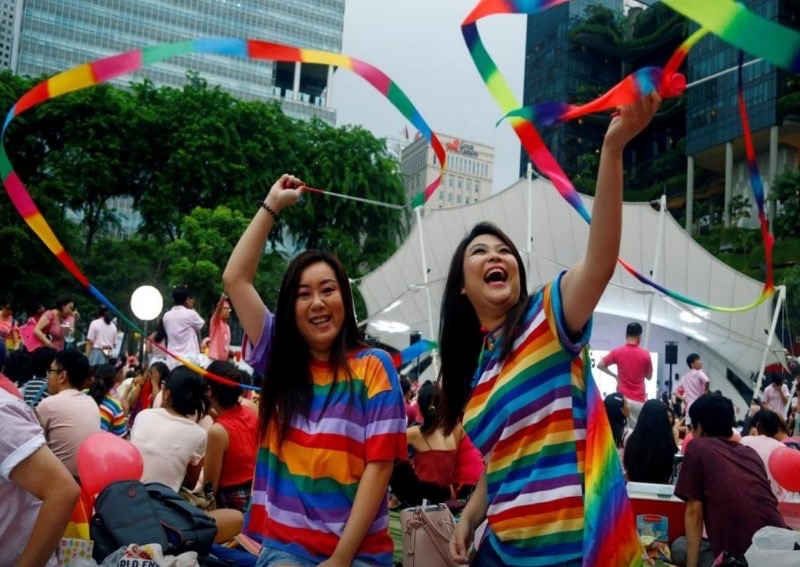 I was amused but not surprised by the Ministry of Foreign Affairs’s hypocritical statement yesterday about the co-hosting by the US Embassy of a webinar on LGBTQI rights with local LGBT support group Oogachaga to mark the May 17 International Day Against Homophobia:

MFA notes with regret that the US Embassy in Singapore co-hosted a webinar with a local organisation Oogachaga on 17 May 2021. MFA has reminded the US Embassy that foreign missions here are not to interfere in our domestic social and political matters, including issues such as how sexual orientation should be dealt with in public policy.

These are choices for only Singaporeans to debate and decide.

MFA never issues a statement when foreign leaders and journalists praise PAP leaders and  policies, warning them not to interfere in domestic politics. Examples include both Obama’s and Biden’s fulsome praise of Lee Kuan Yew on his death as a great statesman. Western newspapers like the Financial Times routinely publish misleading articles with statements attributing Lee Kuan Yew with having transformed Singapore from a fishing village or a mangrove swamp to a first world city. No mention is made of the fact that by the 1920s Singapore already had the second highest GDP per capita in Asia after Japan and already at the centre of international trade routes from the fifteenth century if not earlier. No POFMAs are issued to correct Singapore’s misleading GDP per capita figure, which places us at or near the top compared to other countries, pointing out that when normalized on a per hour basis and compared with global cities not countries the figure is much less impressive or even that much of Singapore’s GDP growth and foreign investment, like Ireland’s, is driven by corporate tax avoidance.

Similarly Lee Hsien Loong is always quick to scare Singaporeans  by stoking fears that foreign investment will flee Singapore if more Opposition MPs are elected into Parliament or if there is a change of government and that he and his team are the only reason that MNCs choose to invest in Singapore rather than elsewhere in Asia. This has been the PAP’s line since Lee Kuan Yew’s time, trotted out at every election, though clearly the electorate has rightly become skeptical of LHL’s attempt to use foreigners to buttress his authoritarian rule and increasingly see through his arguments.

Given his supposed sensitivity and deference to what foreign investors want, it is surprising to see MFA issue a statement rapping the US over the knuckles. Most of the world’s leading banks and companies, at least Western ones, come from countries where it is illegal to discriminate against LGBTQI people, much less criminalise sex between adult men. Even China has stopped criminalising homosexuality. PAP always say that Singapore must remain open to foreign talent. If so it has to recognise that some of the foreign talent will be LGBTQI.

In the years ahead it will be increasingly difficult for the PAP to keep up the pretence that Singapore can pick and choose which rights to adopt and that it can remain stuck in the nineteenth century, with the British colonial penal code of 1860, while posing as a twenty-first century global city and an attractive place for foreign talent to come and work. It is not China which can wall itself off from the rest of the world. If the PAP do not want Singapore to conform to internationally accepted rights and norms they should turn away foreign investment and abandon pretensions to be a leading global city. All that MFA’s statement means is that Lee Hsien Loong welcomes the right kind of foreign interference, that which he thinks will intimidate and mislead Singaporeans and convince them to keep him in power.