When Will Singaporeans Pluck Up the Courage to Leave the PAP Kindergarten? 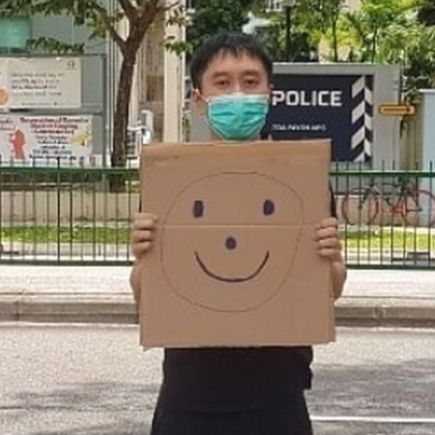 Many Singaporeans first get to know the lightning symbol (which LKY stole from the Nazis via the British Union of Fascists) when they attend the PAP Community Foundation kindergartens. And as far as the PAP Government is concerned, it might as well be Hotel California for Singaporeans. They can check out of the PCF nursery but they can never leave. To LKY and his son and the other PAP Ministers, Singaporeans must be infantilized, disrespected, intimidated and denied even the most basic rights that citizens of other countries at similar levels of development have come to expect. It has been a constant theme of my blog that this surrender of rights and willingness to be infantilized has not brought Singaporeans prosperity, at least not more than they would have achieved if Singapore had been a proper democracy.

The reductio ad absurdum of this long surrender can be seen in the recent arrest and charging of Jolovan Wham for holding up a smiley-face sign by himself outside Toa Payoh Neighbourhood Police Centre in support of two climate change activists. The reasons why he did so are immaterial.  Clause 14 of the Constitution states that

but that Parliament may by law impose:

Parliament, which is just a rubber stamp for the Executive passed the Public Order Act of 2009 which requires an assembly of even one person to get a permit from the Commissioner of Police. It goes without saying that any request for a permit would be refused.

Our Constitution is supposed to be supreme (Clause 4) and any law enacted by the legislature which is inconsistent with the Constitution shall be void. No reasonable person would see one person holding up a smiley face as threatening public order. In a state where there was true rule of law one would be able to challenge laws removing fundamental rights in court. However in Singapore, where LKY succeeded in making the judiciary merely an arm of the Executive from the 1960s onwards, Singaporeans have no right to sue the Government over constitutional breaches. This was affirmed by the Court of Appeal’s judgement when I sued the Government over the IMF Loan Commitment and the judges rules that I did not have locus standii because the breach of my rights was a breach of all Singaporeans’ rights.

The reality is that the Constitution is not worth the paper it is printed on because it can be amended at will by a Government holding over 80% of the seats in Parliament. Even where it is challenged as my father did in 1997 over Article 144 of the Constitution requiring Parliamentary approval for loans and guarantees the AG stands guard to interpret it in a way that protects the Government from breaching it, however such an interpretation might depart from the natural and ordinary meaning of the words. And if one challenges the Government’s interpretation our courts have said they will not entertain any challenges to the legality of the Executive’s actions.

Over a long period Singaporeans have allowed their rights to be taken away and dissent to be criminalized starting with LKY bringing in the Vandalism Act in 1966 against the young supporters of Barisan Socialis. By walking out of Parliament, after the provocation of arrests under the ISA of many of their MPs, and pledging to take the fight to the streets they played right into LKY’s hands removing all Opposition from Parliament until JBJ won Anson in 1981. The Barisan’s new strategy of slogan daubing and poster hanging allowed LKY to equate Opposition with criminality and in the minds of Singaporeans.  Under the Vandalism Act caning became mandatory on conviction for offences such as painting slogans or putting up posters. At the dawn of Singapore’s transition to what Shanmugam’s ex-wife calls “urbane authoritarianism” in her book “Authoritarian Rule of Law”, there was still some opposition to the PAP, with a lone PAP MP and lawyer speaking out against the disproportionate severity of caning for a nonviolent offence in Parliament and Singapore’s first AG, Ahmad Ibrahim, resigning or being forced out for voicing opposition to the punishment. Nowadays the institutions of civil society, like the Law Society, have all been neutered, taken over or co-opted and even the Opposition MPs in Parliament are careful to make sure they do not attack the PAP hegemony only calling for a few cosmetic reforms. As Jothie Rajah states (though with too much academic and arcane verbiage presumably to try and make her criticisms acceptable) Singapore ranks highly globally on indices supposedly measuring rule of law because they are only concerned with the formalities and do not take account of the fact that most legal institutions like the judiciary and the AG are supposed to act independently but have been captured and made mere arms of the Executive (in practice first LKY and now his son.

Paul Theroux, the American author, in one of his short stories called the Straits (or State) Times only fit for using as toilet paper. Under the rule of the Lees the Constitution has been reduced to the same level. This is why when JBJ set up the Reform Party he made its objective (which can be read in the Party Constitution here:

That every member of the society is born with fundamental rights which cannot be abrogated except in clearly defined circumstances spelt out in the Singapore Constitution and that it is the paramount duty of the society to promote the human dignity of its every single member.

Jolovan Wham stands up for these rights as they should be protected under the Constitution. Singaporeans have to decide whether they want to continue to be infantilized, and treated as slaves by a Government that regards foreigners as more important, or whether they want to assert the rights that should be theirs at birth.