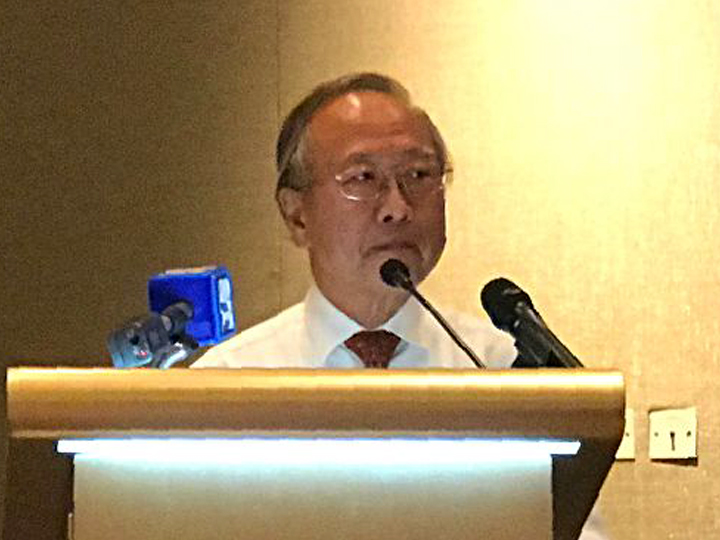 Far too late, Dr Tan has broken his silence on the Government’s changes to the Elected Presidency. Sure he has had nearly a year to participate in hearings and give his views. Even Sylvia Lim piped up in Parliament though God knows why as it always used to be in the WP manifesto, derived from JBJ,  that the EP is an infringement on the sovereignty of Parliament so Lim and the other WP MPs should by rights have boycotted the debate.

But I am not going to argue that Dr TCB is late by a year. I am going to argue that his lateness in speaking up and his reticence go back way further than that. It is clear that Dr Tan’s failure to speak up goes back at least to the first Presidential Election contest in 1993 when he was still a PAP MP.

For those whose memories do not stretch back that far, 1993 saw the “election” of Ong Teng Cheong, who so far has been the only EP who was prepared to give the role some teeth and not just treat it as an overpaid sinecure for elderly ex-Ministers and cronies of the Lee family. (After all what other job pays over $1 million p.a., which used to be $3.5 million before the Government cut it after the 2011 election, while allowing plenty of siesta time and opportunities to improve your golf handicap coupled with luxury foreign travel with first class flights and accommodation thrown in all courtesy of the taxpayer!).

However I put “election” in quotes because the only other candidate to be allowed to challenge Ong was the former Accountant General Chua Kim Yeow. Again Dr Tan’s timing is way off when he remarked at his press conference that:

“our EP will always be tainted with the suspicion…. to prevent my candidacy.”

The EP was already tainted in 1993, Dr Tan, but the candidate the Government was aiming to prevent was J B Jeyaretnam. My father applied for an Eligibility Certificate to be allowed to contest in 1993 but was judged “not of sufficient moral character.” I remember the words almost exactly because he showed me the letter he received from the Presidential Elections Committee (PEC). JBJ had only two years ago finished the five year period during which he was not allowed to stand in general and other elections. This followed his conviction on fake charges in 1986, a conviction which LKY refused to reverse despite the Privy Council ruling on appeal that his conviction was “a grievous miscarriage of justice”. The way the PAP used his fake conviction to keep JBJ from running perfectly illustrates what Justice Cole said in his Amos Yee judgement, was “the modus operandi for the Singapore regime, critics of the government are silenced by civil suits for defamation or criminal prosecution.” So Ong got a clear run at the Presidency unencumbered by a serious or non PAP biased challenger.

I am reminded of another monumental change to our constitution where again the PAP used the excuse of protecting minorities but in reality the decision was aimed at putting obstacles in the way of Opposition parties. I am of course referring to the introduction of GRCs. We all know the real reason for GRCs as much as we know the reason for reserved EP elections. Dr Tan Chen Bock didn’t object to GRCs as tainting our electoral system or when his SMC was absorbed into West Coast making it a bigger and more formidable GRC. I didn’t hear him complain that the people of West Coast were deprived of full citizenship by being denied the ballot box for over a decade.
So the PAP were able to fix the result of the 1993 PE beforehand just as they fixed so many other elections and they did not even have to resort to the intimidation and blatant disregard for the law that they displayed in Cheng San four years later. This would in any case have been difficult in a Presidential Election which is supposed to be nonpartisan and it is probable that my father would have stood a good chance.

So where was Dr Tan while this blatant fixing of the PE went on? Did he say that JBJ’s conviction should be annulled and he should have been reinstated to Parliament when the Privy Council asked the Singapore Government to do so back in 1988? Did he say that the PEC should not be using a bogus conviction to stop my father from standing? No, he kept quiet though he did pipe up nastily after the 1997 GE to say that JBJ should not accept an NCMP seat after he had criticised the scheme.

Let’s look at the last bit of timing. The timing of Dr TCB’s press conference. Though the EP Amendments were passed in February they only became law on the same day as his`Press conference which seems to have been timed to coincide for maximum PR impact.

Of course one should not be surprised by Dr Tan’s failure to speak up in 1988 or 1993 or 1997 or any other time. He was a PAP MP for 26 years. When he stood for President in 2011 he was perfectly happy with the rules designed deliberately to exclude almost all candidates unless they were beholden to the PAP and the Lee family in some way, either as a former senior civil servant, high court judge or CEO of a company with at least $100 million in assets.

This means that his claim that the decision to count the first Elected President from Wee Kim Wee instead of Ong Teng Cheong, and thus reserve the 2017 election for a Malay candidate, is aimed at excluding him from running, while undoubtedly correct, is undermined by his obvious self interest and failure to speak out before when he did not have a personal interest. In other words we know he was fixed but he has been complicit in so much fixing that went before.

I have long spoken out against the EP since without significant reform and greater powers it is no kind of check on the Executive. It was introduced in 1991 when the PAP was scared that they had not fixed the electoral playing field enough and that improbably JBJ’s Workers Party or the SDP could sweep to victory. But it was neutered from the start by making sure anything the President did without following the advice of the Council of Presidential Advisers, a majority of whom would almost certainly side with the PAP, could be overturned by a two-thirds vote of Parliament. Furthermore the President could be impeached by the same majority vote. As Ong Teng Cheong discovered, the Government would stonewall any attempt at properly fulfilling the financial watchdog functions of the role. The latest changes to the EP just reduce the President’s role even further and ensure that PM Lee can micromanage the result with an even greater degree of precision to reduce the chance of a candidate he has not chosen being elected to nil.

Singaporeans should realise that voting overwhelmingly for the PAP to exercise unfettered control over every aspect of their lives includes giving their blessing to a fake PE contest or anything else at all that the PAP feel like rubber stamping. Like the good doctor says: timing is everything.

The bus heading for change left the bus station about 30 years ago.