Does the Fact That Job Vacancies Were More Than Job Seekers Mean We Should Not Be Worried?

On the face of it surely it is a testament to the strength of our economy that there are more vacancies than unemployed. According to the report there were 116 job openings to 100 job seekers during the July to September quarter last year which was down on previous quarters but still more openings than unemployed. This appears good compared to other countries. In the US the national ratio between unemployed persons and job openings had fallen to around 1.5 by November 2015 from a high of over 6 at the height of the recession in 2009.  In the UK the ratio has also been declining but is still around 1.9.

So we look good. Or do we? The first problem is that over a third of the Singapore work force is made up of guest workers. If they lose their jobs they get sent home. In fact MOM do not even bother to extend the unemployment survey to those living in workers’ dormitories. MOM also computes something called the resident unemployment rate which is just for citizens and PRs. This is always at least 1-1.5% higher than the total unemployment rate. However even this number is likely not to reflect the real unemployment rate among citizens. One would expect a higher percentage of PRs to be employed than citizens since otherwise they would likely be ineligible for PR status.

Then those doing NS are counted as employed as is everyone in full time education.  The desire to keep the unemployment rate down might explain why the PAP Government is always keen to subsidise employers to send employees on courses rather than lay them off. In fact there is a new scheme run by the Workforce Development Agency where the Government pays 95% of the course fees for new hires plus 80% of the hourly basic salary. Whether this improves productivity is highly debatable. Most of it is likely to be money wasted just keeping people off the unemployment statistics.

The figures for job vacancies are unlikely to be realistic either. 40% of the vacancies went unfilled for six months or more, particularly among non-PMET jobs where the proportion was 55%. These are likely to be jobs where the working conditions and pay are so unattractive to Singaporeans that only foreign workers are willing to do them. Similarly many of the PMET job vacancies might only realistically be aimed at foreign workers. It is only the fact that there are so few restrictions on employing foreign labour that these businesses are still located in Singapore and have not moved offshore.  If we discounted the vacancies that have gone unfilled for six months or more as not being real jobs or jobs that Singaporeans would not be offered then the ratio of unemployed persons to vacancies might look more similar to those in the UK and the US.  We are also comparing Singapore with whole countries whereas a proper comparison should be with other cities like London or New York. It is likely that the number of job vacancies outnumbers the number of jobseekers in these cities also given that they have been growing faster than the national economy, particularly London’s

A better measure of the tightness of the labour market might be the job vacancy rate which measures the number of job openings as a percentage of those in employment. For Singapore the rate declined from 3.2% in September 2014 to 2.7% a year later. By comparison in the US the rate rose to 3.7% in November 2015. 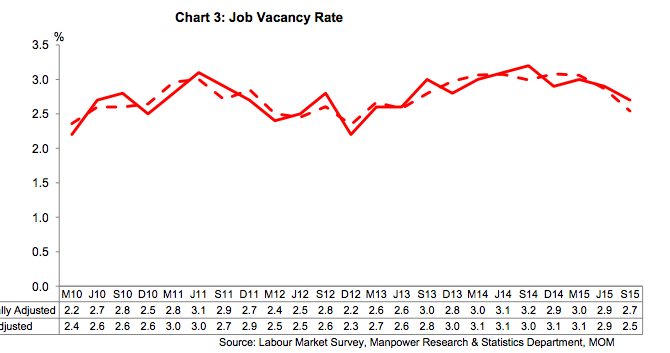 Graph is from Job Vacancies 2015 report by MOM

Looking past the PAP Government spin the prospects for Singaporeans in the local job market do not look great. The situation will undoubtedly get worse over the next year or so as due to global recession there will be more competition from foreign PMETs willing to work for much less and a increasing lack of non-PMET jobs that pay a living wage to Singaporeans.