The Terrible Irony of the Prime Minister’s Defamation Suit 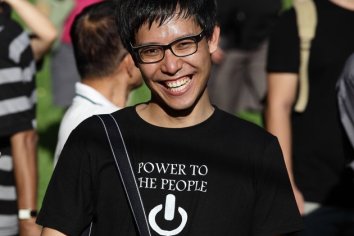 It should be clear to everybody that what the Prime Minister has done in getting his Press Secretary to defend his reputation is no different in essence from buying pineapple tarts with state funds to give away as gifts to enhance his own personal standing with foreign diplomats.

Or in the most piquant of ironies, like the actions of Kong Hee who allegedly used City Harvest Church monies to enhance his wife’s singing career.

We are still waiting for Lee Hsien Loong’s response.

Here’s how local blogger Andy Xian Wong has explained the importance of the questions put to the PMO  by the Reform Party.

The separation of public power and private benefit is essential for transparent, effective and honest governance. The Chairman of NEA cannot ask his staff to go and clean his kitchen, or the premises of his sister’s hawker stall, when it gets dirty. The Commissioner of Police cannot ask his officers to set up a road block at the end of his street because he finds the traffic too noisy. The Minister of Community, Culture and Youth cannot just instruct a local museum to display his daughter’s art work. So can the Prime Minister ask a civil servant to write letters on his behalf, and in his support, on the very personal topic of his defamation case against Roy Ngerng? This question matters, and it is the reason Kenneth Jeyaretnam of the Reform Party is quite right to seek a full accounting of public funds spent on a case the PM has clearly stated he is bringing in his personal capacity.

Take the examples above in turn and we can see a use of public office for private gain. The Chairman of NEA probably has a kitchen in his home, but it is his private space and he should clean it himself or pay for it to be cleaned out of his own pocket. His sister may operate a hawker stall, but that would be her own private business and she should arrange for it to be cleaned herself. Neither should get their cleaning for free, just because the Chairman of NEA asked his staff to help out.

The Commissioner of Police may not like the traffic noise outside his flat, and the Officers under his command may sometimes be in the business of setting up road blocks, but they certainly can’t set one up at the end of his street just because he felt like asking them to do so. He should instruct those officers only as part of his official duties in line with agreed policy.

And while a local museum is obviously responsible for displaying art, they should choose for themselves what to display, why and when. If the Minister’s daughter happened to be very talented, then perhaps she would earn a place in a local gallery, but certainly not just because her father asked for it.

In each case, public servants are not necessarily doing something they would not ordinarily do – be that setting up road blocks or displaying art. The questions are why they are doing it and for whose benefit. In each case, they are doing it for the personal and private benefit of someone powerful in government who has asked them. The Chairman of NEA would gain personally by not having to pay cleaners to come and take care of his kitchen. The Commissioner of Police would gain by having a more peaceful environment at home. The Minister with a penchant for art enjoys the prestige of seeing his daughter’s work displayed in a fine museum or gallery. Should this be allowed? The answer in all three cases above has to be no. Government officials should not gain privately or personally from the power or influence of their positions. Public servants should carry out their duties only in alignment with objective policy goals.

Which brings us to the case of PM Lee’s Press Secretary. She is a civil servant, paid for by the public presumably to assist in the smooth operation of government, and who has been writing to international media in support of Lee Hsien Loong’s case against Roy. However, Lee has been very clear from the start that he is bringing this case against Roy in his personal capacity, not as Prime Minister. This distinction is crucial, as it brings us to the question of public power and private benefit. Not everyone is powerful enough to be awarded a Press Secretary paid for by the state, but the office of Prime Minister enjoys one. If Lee is not acting as PM when he sues Roy, then the role of his Press Secretary should really be irrelevant to the matter. But yet Lee seems to be enjoying the personal benefit, in the context of a personal legal case, of having supportive letters written for him by this publicly funded member of staff. If LHL needs letters writing to his media critics overseas, he should pay for his own lawyers or public relations advisers to write them. He shouldn’t get them written for free by his government staff.

Lee Hsien Loong has made a mistake. It would be wrong of him to allow public funds, staff or resources to be used in support of his personal and private business. Even if he has not allowed that to happen, it is wrong that a situation has been allowed to develop where it appears that he may have done so. He should clarify immediately, answer Kenneth’s questions and reassure Singaporeans that state resources have not been used inappropriately on a private matter. Lee’s case against Roy in the first place was over a supposed allegation of misuse of state funds. It would be a particularly dreadful irony if people were left with the impression that PM Lee had misused state funds in support of the case.

Join 3,921 other followers
Follow The Ricebowl Singapore (TRS) on WordPress.com