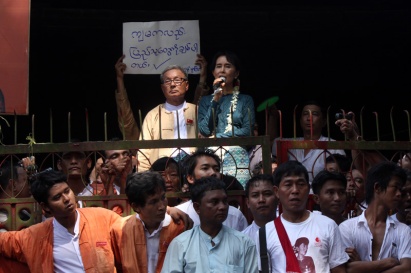 At the beginning of this month I started exchanging correspondence with some contacts in Amnesty International sharing my view that Amos was  a prisoner of conscience.  I am delighted to say that after monitoring and considering the situation they have just written to me to say that they concur. Amnesty International will recognise Amos Yee as a prisoner of Conscience.  Amos Yee does fulfil their criteria because his actions, though offensive, should not have been criminalised.

This is the email I just received from my friends at AI:

Well, the IS has considered it and judge that he is indeed a POC by Amnesty’s definition.   What he said falls under the kind of edgy and sharp expression of opinions that may annoy or insult, but it was peacefully said and doesn’t fall under the definition of incitement etc and is not grounds for criminalization. WE will speak out and expect to issue a statement ahead of the 23 June court hearing.

This puts Amos in  the  same company as Aung Ang Suu Kyi and other international figures. Most recent prisoners of conscience as would be expected,  come from places like, Saudi Arabia,  Iran or Bahrain. What excellent company we keep.  Here is how Amnesty describes a prisoner of conscience.

“Amnesty International campaigns for the release of prisoners of conscience – people who have been jailed because of their political, religious or other conscientiously-held beliefs, ethnic origin, sex, color, language, national or social origin, economic status, birth, sexual orientation or other status, provided that they have neither used nor advocated violence.

Amnesty will  also be speaking out and will issue a statement before the hearing. So perhaps there is some hope that international pressure can be brought to bear to get Amos released before he is harmed any more than he has been.

Wikipedia describes a prisoner of conscience thus : ”  Prisoner of conscience (POC) is a term coined by Peter Benenson in a 28 May 1961 article (“The Forgotten Prisoners“) for the London Observer newspaper. Most often associated with the human rights organisation Amnesty International, the term can refer to anyone imprisoned because of their race, sexual orientation, religion, or political views. It also refers to those who have been imprisoned and/or persecuted for the non-violent expression of their conscientiously held beliefs”

Before I got this email I had been reading  the letter that Alfred Dodwell, Amos’s lawyer, had sent today to Justice Jasvender Kaur. It makes me feel ashamed to be a Singaporean to read about the wanton and deliberate cruelty that has been inflicted on Amos, all in the name of “rehabilitating” him so that he will no longer dare to criticise the Lee family and of scaring any young people who might be inclined to follow him and actually believe they had any rights in Singapore. I labelled Amos Singapore’s Youngest Political Prisoner in a recent blog. This is clearly  what he has become.

When Amos confessed that he felt suicidal to a prison psychiatrist, the prison responded by tying him hand and foot to a bed in the mental ward where he was left for a day and a half, surrounded by disturbed inmates and forced to use a bottle to relieve himself. As I have stated before, confinement in mental hospitals and prisons with violent inmates for political prisoners was standard treatment in the old Soviet Union and other totalitarian states. We can now be proud that in the twenty-first century we have reached that level, and all to protect a dead man and his children. Amos’s mother contacted Dodwell with her concerns that her son is being driven to suicide by the prospect of endless incarceration that lies before him. She says that Amos is very scared of what might be in store for him in Reformative Training (RT) and whether he will be raped and victimized by the hardened criminals inside.

Why have these terrors been inflicted on this boy for merely exercising his rights to freedom of expression? There is a glaring contrast between Amos’s cruel and inhumane treatment and that of the person who stalked him and assaulted him. He should have been tried for stalking and premeditated violence. Yet our AG allowed him to plead guilty to voluntarily causing hurt, which suggests just a momentary act of foolishness. That adult has already been released from his brief jail sentence and can return to his family whereas Amos can look forward to years of jail and control. According to Dodwell, Amos is still traumatized by being struck by this thug. And why has no action been taken against the people who made graphic and pornographic threats to harm him on social media?

Dodwell has asked Justice Kaur for the hearing on 23 June to determine if RT is suitable for Amos to be brought forward. He makes all the points that I made here which demonstrate that RT is way too harsh for a child of 16 convicted of doing what Amos did. Dodwell also criticises the way the judge allowed new evidence to be taken into account post-conviction and without giving the defence adequate time to respond. In his words, “it is our contention that the whole trial-sentencing process has been tainted” as a result of the “irrelevant and highly prejudicial material placed before the Judge”.

But this has always not been about punishing Amos for what he allegedly did but about locking him away and breaking him so he can no longer offend the ruling family or influence young Singaporeans to think that the freedoms in our Constitution actually mean something. It appears that simple humanity is beyond Justice Kaur and the AG.  I find it shameful that  Lee Hsien Loong and other members of his family allow this prosecution to go ahead without speaking up and saying that they were not offended by Amos’s comments about their late father. As son of the founding father of modern Singapore LHL could so easily have spoken out to calm the situation down. More than that, more than being able to do it he was obliged to do it. Of all People LKY would have said that politicians need thick skins and that you should speak your mind.

Many people have asked what they can do?  You can and need to speak up. NOW!. Write letters to the papers, the forums, the WSJ, Huffington Post, Daily Mail, SCMP or leave comments here on my blog where I bear responsibility.  Be polite but express your feelings. Christians should unite to confirm that Christianity is a religion of forgiveness. Ask your priests to write letters. As many people as possible  should attend the  court hearing.   Here is the letter from Amos’s lawyer: