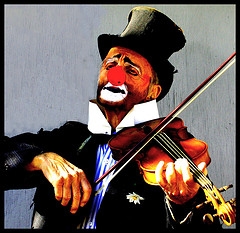 The PM recently brought out a violin in Parliament and plucked the heart-strings with his sad song about the lack of revolving doors in Singapore leading to loss on income.  Apparently our Ministers are unable to take advantage of the revolving door system common in other countries. There wasn’t a dry eye in the house.   Before you reach for your hankies, I should point out that it is not true! The “revolving door” phenomenon whereby ex-Ministers and MPs move into the private sector is just as active in Singapore as it is elsewhere. (and also the PM didn’t actually have a violin)

If, as the PM says, the post-political earnings potential of our ex-Ministers is much lower than that in other countries, then that is a clear indicator of the quality of our Ministers. Whatever one thinks of the man or his politics, Tony Blair is a good speaker. No wonder Blair is paid so much on the lecture circuit. Bill Clinton also earns his keep. Who would pay to hear our Ministers?

The PM has also cited so-called “clean” pay without any hidden perks as being the advantage of the Singapore system. He has omitted to mention the much more progressive tax systems in most of these countries which mean that when after-tax pay is compared, the divide between what our Ministers are paid and what leaders in other countries get would be even starker.

While some leaders may get free accommodation while in office, surely our PM also does not have to pay for his living costs when on overseas trips and for meals taken as part of his official duties.  A few days ago I wrote a blog post to refute the notion that high ministerial pay is there to recruit talent suggesting instead that it is there to buy loyalty and a culture of yes-men. I’ll now rebut some of the other frankly specious arguments the PM used to justify high ministerial pay.

The PM cited the US as an example of a country where there is a ‘revolving door’ between the public and private sectors for politicians and government officials and where post-politics earning potential is high. However only recently we learnt that ex-Foreign Minister GeorgeYeo had joined the Kuok Group as vice-Chairman of its Hong Kong holding company, Kerry Group.   Property Edge in the ST cited this comment from one of its sources:

‘My guess is that he is there to open doors with his network of contacts from when he was foreign minister,’ said real estate veteran Peter Ow, who is managing director of SLP International Property Consultants.   ‘He can guide and advise them on expanding into new overseas markets,’ Mr Ow said. ‘When you do business in Third World countries, you need government contacts.’

Similarly Ms Lim Hwee Hua was also appointed a non-executive director of Jardine Cycle and Carriage within two months of losing at Aljunied and in October she was appointed a Senior Adviser at the private equity behemoth KKR followed by being appointed to Ernst and Young’s Global Advisory Council. Likewise, Ong Ye Kung continues to be Deputy Secretary General of NTUC as well as sitting on the board of SMRT.   So contrary to what the PM claimed our Ministers and ex-PAP MPs, at least those of ability and with a high international profile, do not find it difficult to move into high-paying jobs in the private sector once they leave. I have no idea what KerryGroup are paying Mr.Yeo but I suspect that it cannot be too far from his previous Ministerial salary.

And Ms.Lim’s employers, KKR, one of the biggest private equity firms in the world, are not exactly renowned for paying badly. The PM’s claim that becoming a Minister is at great cost to one’s career is not borne out by the evidence.   In an article (http://sonofadud.com/market/comfort-and-city-cab-two-more-pies-with-fingers-in-them/) on the taxi monopoly, I wrote about how,

“Its [Comfort Delgro] board and management are a splendid example of the Japanese practice of “amakudai” or “descent from heaven”.  Most of the board are ex-civil servants, former government scholars, or present or ex-MPs who have graduated here after careers with Temasek or one of its stable of companies.” This practice has been condemned in Japan where “The practice is increasingly viewed as corrupt and a drag on unfastening the ties between private sector and state which prevent economic and political reforms.”(Wikipedia).

This practice of moving between the public and private sectors seems to be the norm in Singapore.  Blue chip companies obviously find it of benefit to appoint people with previous experience or connections with Temasek and other GLC-linked companies. With such an enormous public sector responsible directly and indirectly for up to 50% of GDP it may be difficult to avoid. However it would be worth examining the question of whether this results in conflicts of interest which get in the way of what should be a meritocracy and a competitive market. It may have real economic costs in terms of misallocation of resources. In Japan in 2007 the Asahi Shimbun published research which showed that 70% of companies that hired retired bureaucrats won contracts without going through a bidding process while this was true of only 18% of companies that did not.

The Venerable but Fake Argument for the Benefits of Stability

The PM also points to the benefits of stability in Singapore in that government ministers do not change very often. He again betrays his fundamental misunderstanding of the benefits of democracy and competition. Stability is not a normative goal unless it brings other benefits. The Soviet Union was very stable until it collapsed while North Korea today can be said to be a paragon of stability with the last name of the leader never-changing.  Competition in business results in innovation because of the pressure to perform and gain an edge. Monopolies or quasi-monopolies fail to change until it is too late. The same is true of politics. Where he sees stability, I see the danger of ‘yes men’.

The government’s long stewardship of the Singapore economy has resulted in a huge expansion of jobs for foreigners but has not done much to raise real incomes of Singaporeans over the last ten to fifteen years. A large part of foreigners’ high regard for Singapore is bound up with the fact that it is perceived as so easy for them to come here and work. We should welcome foreign talent but not to the detriment of our own people. While we may not have performed markedly worse than other advanced countries in raising living standards over the last decade it does not provide a convincing argument for high ministerial pay.

What is the Bonus for?

I can’t see the point of having a bonus.  Why pay someone for doing a job well when it is their obligation to do that job well? It is public service after all. And they were chosen for their ‘ top talent’  ability to do it in the first place.  Bonuses in the city work in a different way. The basic pay can be very low almost negligible.  The bonus is a fixed percentage of clear profit earned for the firm. If you mess up and make a loss or only a small profit then you barely get paid that year.  This also has the benefit of weeding out those lacking talent for the work who can’t affords to keep at it without a bonus.  Also, while the new KPIs that the bonus is based on are a little more appropriate,  they have still retained GDP which can be manipulated by increasing immigration. Why would we give our Ministers a bonus for creating the problem not the solution? Even the new KPIs are potentially easy to manipulate as the Statistics Department is not independent.

If the PM really wants to justify such high Ministerial salaries then I suggest that part of the Ministerial bonus be deferred till after they leave office, rather like gardening leave with private sector employers. Then if they get alternative employment within say three years of leaving office this portion would be forfeited. This would act as a tax on the valuable experience and contacts built up in office. It would ensure that part of this externality was captured by the nation rather than going solely to the individual concerned. A future employer would then have to evaluate whether it was worth it to buy the Minister out of his deferred bonus, rather like the scholarship bond functions today.