Comfort and City Cab. Two more pies with fingers in them. 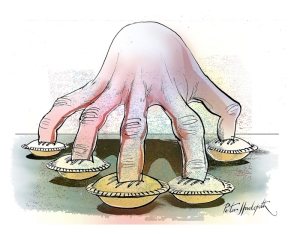 The nature of our small metropolis, the costs of private vehicle ownership and other factors such as convenience for elderly and physically challenged users, means that Taxis must be viewed as part of our public transport network.  It is therefore not surprising that most of us have been unhappy at the recent fare hikes and increases in surcharges announced by the largest taxi operator, Comfort and CityCab, which is owned by ComfortDelGro Corporation.    The National Taxi Association (NTA)’s call for the other taxi companies to swiftly follow suit has furthermore appeared, to many, to smack of price-fixing.  There have even been calls for the Competition Commission of Singapore to take action for anti-competitive behaviour.

However this is naive given the industry’s structure. Furthermore it plays into the government’s deliberate lack of transparency when it comes to admitting to the degree of ownership and control it exercises over the Singapore economy.  The problem is the dominance and nature of the government linked entities. This is the elephant in the room and would be activists should complain about this rather than cry “price fixing”,  before they pen letters to the Competition Commission.

Firstly, Comfort and CityCab between them have over 60% of the market for taxis. SMRT, a Temasek-controlled entity, has another 10-15% of the market. While ComfortDelgro is publicly listed with no single majority shareholder, the largest shareholder is the Singapore Labour Foundation, which is the investment arm of NTUC.  Its board and management are a splendid example of the Japanese practice of “amakudai” or “descent from heaven”.  Most of the board are ex-civil servants, former government scholars, or present or ex-MPs who have graduated here after careers with Temasek or one of its stable of companies.  To quote Wikipedia, “The practice is increasingly viewed as corrupt and a drag on unfastening the ties between private sector and state which prevent economic and political reforms.”

With that combined level of market share the taxi market can be viewed as highly concentrated. Economists would call this monopolistic competition. SMRT and ComfortDelGro’s control of the taxi market is reinforced by and reinforces their monopoly of all other forms of public transport in Singapore. I have pointed this out numerous times, most recently on 23rd November in “Another Round of Monopoly Anyone?” (http://sonofadud.com/2011/11/23/another-round-of-monopoly-anyone/). While there may be a high elasticity of substitution between different forms of public transport the elasticity between public transport as a whole and other forms of transport is considerably less.  Commuters would face considerable “sunk costs” in switching to private transport and this is not available to any but the highest income groups. The monopolists are able to maximise profits across public transport as a whole and given that demand will be fairly inelastic have a fair ability to raise prices. The only constraint is the Public Transport Council which in the same way as the NTA is filled with government and company-friendly appointees and thus unlikely to be as tough in defence of consumers’ interests as it should be.

In this environment, it would not make any sense for the marginal operators, i.e. Transcab, Premier, SMART and the remaining Yellow Top taxis, to undercut them. If they do so, they would not gain much extra business and risk the dominant operators reducing their prices to drive them out of business. By setting their prices at the same level as the market leader, the industry as a whole maximises revenue and the revenue is shared out according to market share.  In economic terms SMRT and Comfort and CityCab are price-makers and the others are price-takers. Without doing anything to break up the dominance of the two government-linked entities, it becomes irrelevant whether there is any overt price-fixing agreement or other evidence of collusion. The prices of taxi services will still end up at or close to the level a profit-maximising monopolist would set.

The problem therefore is the dominance of the two government linked entities. The monopoly rents are unlikely to accrue to the drivers who have to deal with a monopsonistic market (a limited number of buyers) for their services. Over time the taxi operators are likely to raise their rents and ensure that much of the revenues from higher fares are clawed back from the drivers who constitute an atomistic group without much bargaining power and a fairly elastic supply of new drivers. The industry body which is supposed to represent their interests, the NTA, cannot be said to be independent of the government or its companies since many are MPs or ex-MPs.

While consumers may complain about the fare increases, the fact remains that Singapore taxis are cheaper than in many other cities in the developed world, where often artificial barriers to entry are created. This will be less true after the latest fare hikes. In addition the system of surcharges, which are increased with the latest measures, is badly designed and only succeeds in creating shortages of cabs before and after the surcharge period and long queues of empty taxis during the peak periods.

I have already called for a far greater degree of competition in other areas of public transport, particularly in the provision of bus services. Where more competition is not possible, there should be stronger and more effective regulation, particularly of non-price areas such as frequency of service. With regard to taxis, the decision to phase out independent operators should be reversed provided they meet minimum safety and quality standards. We need to bring back Yellow Taxis and give them freedom to set their own fares and negotiate with their customers. This might eliminate the current demand-supply mismatch at different periods of the day.

Apart from the obvious high rates of return on investment from leasing taxis, perhaps the government was influenced by its desire to see that Singaporeans keep their noses to the grindstone (MM Lee’s “spur in their sides” philosophy or, “You have been given a precious porcelain rice bowl don’t break it!”). The government has always striven to ensure it captures most sources of economic rent.