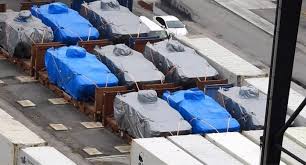 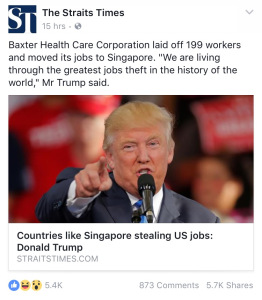 Newspaper headlines have been dominated by Trump’s decision to take a congratulatory phone call from the President of Taiwan, Tsai Ing-wen. This has upended decades of US foreign policy consensus, which is that Taiwan is not to be given any formal recognition as an independent country, despite US pledges to defend the island which have been in place since the Korean war.

This consensus has been in place ever since Richard Nixon visited China in 1971 and normal diplomatic relations were re-established. At the time this was driven more by a desire to outflank the Soviet Union, then the US’s No. 1 adversary, then by an expectation that China would rise to become the world’s second-biggest economy and a challenge to US dominance in both the economic and military  spheres.

Trump is now questioning the value of that relationship to the US, a complete break with the Obama administration’s constant parroting of the mantra that free trade is good for you. Even in academic circles a growing number of American economists are now questioning the benefits of a one-sided so-called free trade relationship with China and the costs in terms of lost US manufacturing jobs. That would be all right if China ran a balanced trade account but its surpluses both with the US and the rest of the world are huge and growing, exerting a large drag on world growth.  Whilst the US has minimal tariffs on Chinese goods China imposes a host of non-tariff barriers to American exports and insists on technology transfers in a whole host of “strategic” sectors.

It’s hard to see how cheap Chinese imports outweigh the fact that the US has nurtured a growing threat from an increasingly assertive military determined to turn East and South-East Asia into vassal states surrounded by a Chinese-controlled ocean.

Whilst I dislike Trump’s racism and authoritarian tendencies, he is spot-on in questioning the one-sidedness of the US-China relationship. It’s also distasteful to see previous US administrations appeasing a totalitarian bully against a democratic country which wishes to assert its right to independence.

I’ve also grown tired of both Clinton and Obama’s ceaseless lauding of Singapore as some kind of model for rule of law and good governance for democracies to aspire to. There was Obama’s fulsome praise of Lee Kuan Yew when the latter passed away and his characterisation of Singapore as a model of diversity. Hilary Clinton held a joint press conference in 2012 with Shanmugam where Singapore was praised for its shared commitment to rule of law and diversity. Then there was the special dinner for our royal coupled to which Ho Ching took a $10 clutch made by an ITE student. These acts of hypocritical humility don’t fool anyone when our PM refuses to make his wife’s earnings at Temasek public or to disclose the size of his or his late father’s estate.

Unfortunately Lee Hsien Loong’s reciprocal support for Obama’s pet projects like TPP haven’t won any brownie points with Trump who’s promised that the TPP will be killed on his first day in office. Trump singled out Singapore during his election campaign as stealing US jobs and with his customary attention to micro details mentioned the specific loss of nearly 200 jobs when Baxter Healthcare transferred production of some of its products to Singapore. LHL clearly was betting on a Clinton victory, even appearing alongside Obama at a press conference where Obama said that Trump was unfit to be President. Like Lee Kuan Yew, Trump’s a man who bears grudges.

But going out on a limb for the US has earned us the ire of China which has issued a series of bellicose statements and seized our military vehicles in transit from Taiwan. One has to wonder at the incompetence of our military leaders that they would route important military equipment through a country that has demonstrated hostility to Singapore.

We have always been led to believe by state media that our leaders and civil servants are masters of diplomacy and realpolitik, despite the clear evidence to the contrary when we see the ramblings of idiots like Bilahari Kausikan. However in Lee Hsien Loong’s case he appears to have taken a foolish gamble and lost.