A Circular Argument by Massagos in Favour of Slave Labour 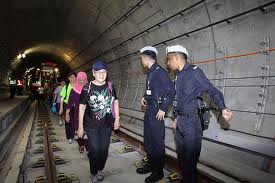 Minister of State Zulkifli Massago’s was reported today(http://www.todayonline.com/Singapore/EDC111214-0000085/National-Servicemen-may-be-deployed-to-safeguard-rail-network–Masagos) as saying that , with the expansion of the MRT and the opening of 12 new Circle Line stations the Government was considering deploying National Servicemen on the front line to keep the nation’s public transport system safe.

This strikes me as totally inappropriate even though the use of National Servicemen as cheap labour has gone on for some time. When they are deployed in this kind of security role it frees our government and the transport companies from having to recruit more volunteer security personnel who would have to be paid a market wage for their services. Our NS men are paid a fraction of what they would earn in a free labour market. This is admittedly somewhat better now than what I got when I was in the army. I still have fond memories of withdrawing $60 salary for one month and being looked at with disgust by the female POSB clerk (no ATM machines in those distant 1970s days!).

In economic terms the deployment of NS men in public security roles amounts to a labour subsidy. There is a transfer of value from the NS men to the owners and operators of the transport network.  Another indirect beneficiary, insofar as the provision of subsidised security services allows them to cut back on private security services, is the owner of the land above and next to the MRT stations and bus interchanges which in many cases will be the Singapore Land Authority or the government-linked property companies such as CapitaLand and CapitaMall. If the transport network was publicly owned then it could potentially be argued that this subsidy was returned to Singaporeans in the form of lower transport fares and/or taxes. However the transport companies and the property companies, with the exception of the SLA, are publicly listed. They may be controlled by the state directly, in the case of SMRT whose majority shareholder is Temasek. Or the government may exercise a shadowy control through the preponderance of ex-civil servants, Temasek directors and MPs on the board and the largest shareholder being an arm of NTUC. This is the case with ComfortDelgro.   But they also have minority private shareholders. In a competitive market fares would fall by the full amount of the labour subsidy. However the public transport market is one of monopolistic competition. Part of the benefits of the labour subsidy, probably the major part, will go to the shareholders of the companies in the form of higher after-tax profits. So private shareholders benefit.  It could be viewed as a form of regressive taxation since it transfers part of the value of the NS men’s output to well-off shareholders. Many of these shareholders are foreign and have not had to do NS.  In addition in so far as the senior executives at SMRT and ComfortDelgro are able to pay themselves higher salaries as a result of higher profits due to the labour subsidy then this is another form of transfer from the less well-off to the better-off which would not happen in a free market.

Even in the case where the increased profits go to the government’s coffers, they are more likely to go into the reserves rather than being redistributed to Singaporeans in the form of higher spending or lower taxes. And as I have repeatedly pointed out, most recently in the article You’ll Be Dead before You Can Spend It (http://sonofadud.com/2011/11/29/youll-be-dead-before-you-can-spend-it-singaporeans-enter-the-20th-year-of-unnecessary-self-imposed-austerity/ ), we are unlikely to get to spend those reserves. They are likely to continue to be used for empire-building but ultimately lousy investments. Alternatively some mechanism will be found to redistribute them to the debtor countries. One extreme is outright default but a more probable scenario is some form of below-market rate of return recycling of our assets. This will take place through multilateral institutions but be orchestrated by the principal debtor countries who rightly feel aggrieved that their consumption and overvalued exchange rates have swelled the current account surpluses of countries like Singapore, Japan, China and Germany. I challenge the government to prove that it has exhausted all investments in Singapore that yield a higher rate of return, even using purely financial criteria.

Even if taxes are lower as a result of the forced labour of NS men the benefits also go to foreign workers and residents as well as women, who have not done NS. They also benefit the wealthier sections of the population given this government’s proclivity for cutting top tax rates while increasing indirect taxes such as GST. I am all in favour of low taxes but not where these are financed disproportionately by a subsidy from the less well-off.

This redistribution of the benefits from the providers of the subsidy is equally true if by some miracle the companies behave as though the market is competitive and return the subsidy to consumers in the form of lower fares. Again foreign workers, tourists, PRs , the lucky foreign students whom our government woos with scholarships and then exempts from NS, and Singaporean women benefit while not having to bear the cost of the subsidy.

One of the causes of the French revolution was resentment at the forced labour tax (the corvée) levied on the peasantry by the state. More recently countries like China were condemned by the West for using convict labour in a range of manufacturing industries. Not surprisingly this made them super-competitive in those areas.  Both the Soviet and Nazi regimes benefited from the huge use of slave labour. When we deploy our NS men in roles in providing services to commercial companies we are doing the same albeit on a smaller scale. Even when our men are used purely for national defence, the savings from not having to pay a regular army leak to foreigners, new immigrants, foreign investors and women, all of whom do not have to bear the economic cost. That is why I have argued that NS needs to be reduced to one year immediately with a view to eventually phasing it out all together. In the meantime, or if this is viewed as undesirable on non-economic grounds, then those doing NS should be paid the full market value of their labour, either directly or indirectly in the form of lower taxes or free or subsidised medical care or further education. In the name of sexual equality women should have to do NS. And foreign workers, particularly those who enter on scholarships but are invited to stay on by our generous government, should do NS or pay higher taxes.

I remember when NS was first introduced, the late Dr. Goh Keng Swee, said that it would be seen as fair because whether you were the son of a millionaire or a hawker, you would not be able to escape.  We have clearly moved a long way from those ideals! It is time to see that the burden is lifted or that those who benefit pay the full market values of the subsidy.